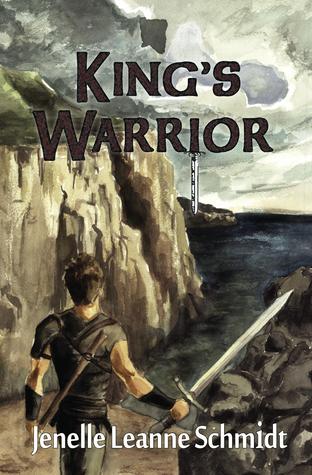 Six hundred years ago the land of Aom-igh was threatened with invasion by the Dark Country across the Stained Sea; in their danger King Llian sought the help of the dragons and the myth-folk. Graldon, King of the Dragons, granted the human king with a gift that would help him defeat his enemies. Graldon also promised King Llian that the dragons would come to the humans’ aid should Aom-igh ever be in such danger again. Years passed, and Aom-igh remained safe and isolated from its enemies. The dragons slowly disappeared and faded into legend and myth, and people forgot magic had ever existed.

When her kingdom is threatened by the Dark Country once again, the headstrong Princess Kamarie sets off on a quest to find the man who may be able to save them all: the former King’s Warrior. Traveling with her are two companions: her eccentric maid, and a squire who resents his charge to travel with and protect the princess. However, finding the legendary hero proves to be the least of their worries. Together the companions encounter more than they ever bargained for. A beautiful gatekeeper, a sword fashioned by dragons, enemies who pursue them relentlessly and hound them at every turn, and an underground world full of mythical creatures are just the beginning of their adventures.

As they search for the answers to mystifying riddles and seek a way to save everything they hold dear the comrades will learn a little about courage, a lot about truth, and more about themselves than they ever imagined. But if they can succeed in their quest, they may join worlds together.

First things first: I received this book from the author, free of charge, in exchange for an honest review, fully disclosed that it’s a pre-print ‘proofing’ copy, largely unedited of typos, grammatical errs, and formatting issues. The purpose of this review is to focus on the story itself.

I’ve heard nothing but good things about this book and have been waiting for an opportunity to get my hands on it for some while now. When I received the offer, I jumped at it, and after reading it over the last few weeks I can honestly say that I enjoyed it. This is a good story with great potential. I loved Brant, Yole, Oraeyn, and Kiernan, although I’ll be honest and say I had Yole pinned from the first time I met him and knew Brant’s secret (at least for the most part) by the end of chapter six. Chock it up to a fair bit of reading in fantasy, because the mystery surrounding them, Brant especially, is pretty well done. Brant’s ability to dodge questions and be all gloomy and secretive is part of his charm.

The story as a whole has a grand scale, with the fate of two countries hanging in the balance, and during this time legends are proven true, heroes are born, and a new age beckons at the door. I am intrigued by the world  Schmidt has created and am quite actually stoked to find out more about Kiernan Kane, of whom I’ve heard some things, and I am excited to see more of him. The ambiguity of his character, and the suspicion that he is, in fact, more than a mere minstrel, is wonderful and perhaps one of my favorite parts.

Still, I won’t say it doesn’t have its flaws. As a fairly recent and largely inexperienced writer myself, I feel like the pot calling the kettle black, but as a reader, too I understand the value of all the hard work that goes into a finished book. Technicalities aside, I got confused sometimes because we’re jumping around in so many peoples’ heads, and I feel there’s more exposition than is entirely necessary. The first chapter felt a little info-dumpy as the stage was being set, and there was some backstory that seemed there purely for gaining sympathy, but I think the scenes would have been stronger without them. The ending was also too clean, considering everything that the peoples went through, and some of it escalated way too fast, I had a hard time wrapping my brain around it.

It’s a rough diamond, but a diamond nonetheless.

Now, I couldn’t begin to say how much editing the version I have went through before it was published, so all of this could be meaningless, and I hope my words won’t dissuade you from having an interest in the story, because I think it is worth reading. There’s heart woven within the pages, daring-do, and humor; grand magic and unique twists. I want to know what happens now, where the characters go next, because there’s so much left that needs doing ─ what’s Yole’s decision? What will Kamarie do with her new-found heritage? How in the heavens is Oraeyn going to manage his new role? And please tell me there’s going to be more about the dragon wards. Please.

And all this not to mention Kiernan Kane. I must know. So, I will continue to read, because rocky, uneven roads often lead to the best places.