Pumpkin Season Isn’t Over Yet!!!

Hey, everyone! Can you believe April’s almost over already, and we’re still waiting for spring to . . . you know, spring? I hope this means we’ll have a nice, long autumn ─ but it is what it is, right? All we can do is make the best of each day we’re given, snow or shine.

Anywho, since the heat hasn’t kicked in yet, cold-time food is still in season. This isn’t so bad, I have an easier time figuring out warming foods than what to serve in the summer. Today I’m sharing one of my new favorite muffin recipes. It’s muffin-y (which is a plus, because let’s face it: muffins are amazing). It’s pumpkin-y (which is a double plus, because I love pumpkins and (so far) everything involving that wonderfully orange puree). It’s also spicy (the warm, cinnamon kind, not burn-your-mouthhouse-down kind), and nutty with a wonderfully sweet-nutty streusel topping.

Mouth watering yet? I know I could go for another one of these babies. 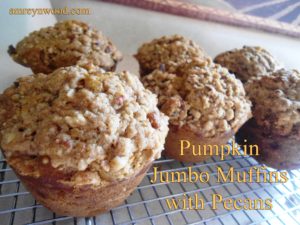 * Don’t have buttermilk? Don’t worry, I don’t usually, either. A neat trick I learned is to put 2 tablespoons of vinegar (usually white distilled, but any kind will work, really) into a measuring cup and then add milk to the 1 cup line (that’s 1 tablespoon for every 1/2 cup, like in this recipe). Let it sit for a few minutes to let cool science happen, and you’ll end up with soured, thickened milk. I use this just about all the time. Another substitution I use is an equal measure of yogurt or sour cream. Those three ─ buttermilk, yogurt, and sour cream ─ are pretty interchangeable, so it’s easy to use whatever’s on hand, but since the yogurt and sour cream we have at home are both super thick, I’ll use the vinegar/milk mixture if I want it a little thinner.

These muffins are so yummy with warm spices and crunchy nuts on the inside and a sweet, nutty topping. They go well with dinner (had these with a roast) or breakfast! This recipe is also easy enough to switch up, too. Don’t have or don’t like pumpkin? Try it with squash puree instead! (Or, you could try replacing it with applesauce, although I haven’t tried that and I’m not entirely sure what the texture will be like. You could also just switch it out with sour cream or yogurt, too). Change the pumpkin pie spice to just cinnamon, or any of your favorite mix of spices. I’m thinking of trying chai spice next time, a combination of cardamom, cinnamon, cloves, ginger, and ground black pepper. I bet coriander would taste good, too. If you don’t have or don’t like pecans, you can nix the nuts altogether or switch them out for your favorite nut as well (like walnuts).

Try them out and tell me what you think, or what flavors you played with ─ I’d love to hear about it!