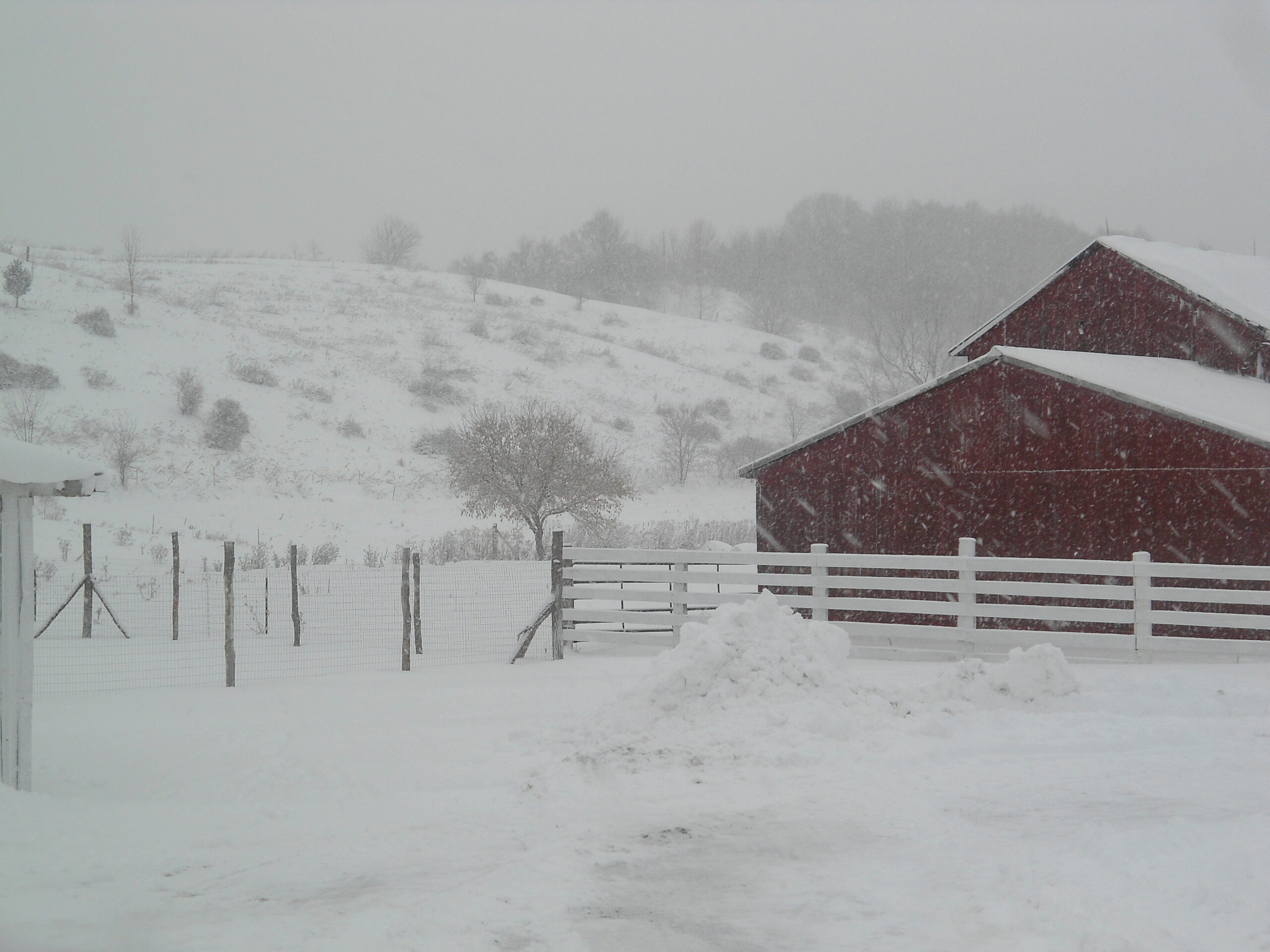 The Farm, in Winter

Hey, all! January is almost over already, and some big changes are in the works for this year – good and bad – but that’s just the way of things in the world, isn’t it? The only thing that doesn’t change is God and his love for us.

This winter has been pretty mild so far up here, with little snowfall. Now, that can change (see?) at any time. Around here, it’s usually the end of January, into February that the ol’ man really gets into things. So, one might be wondering: what does the farm look like in winter? What sort of things do we do in the cold season?

Well, that’s what I’m here to share with you today.

To begin with, over here at Wingnut Acres (our farm’s name – pretty fun, huh?) the growing season doesn’t end until mid-November-ish, depending on the squash bugs demolishing the gourds and how hard and fast the frost falls. We also tried these wee greenhouse hoops over the greens this past year, and that worked wonderfully at providing fresh salad greens almost up to Thanksgiving. Around that time, we start closing things down and buttoning things up. The garden is cleared of shriveled plants, which either go into the compost pile, chicken pen, or cow pasture, and the trellises are stowed away. It’s then bedded down with a thick layer of straw mulch.

Well, it was this year, anyway. We’re still figuring out how best to keep a garden for high-yield, low weeding, keeping the moisture and the nutrients in the soil. Last summer we mulched that baby like nobody’s business, and it worked super well. Weeding wasn’t as daunting a chore (right Mom?) as it has been in the past, and the plants pulled through the drought fairly well, especially considering that we didn’t drag the sprinkler system out there this time.

Potatoes, garlic, onions, and squash are stored in various hidey-places throughout the house (for lack of a proper root cellar) and the basement shelves are, by this time, full with jars of food. Tomatoes, sauce, corn, beans, beets, pickles, applesauce, umpteen kinds of jam – I always go overboard with jam. It’s hard not to. The freezers are also stocked with produce and meat, ready for a cold spell and good eating. Summer is great and all, but there’s a reason all the comfort foods are best served in winter!

Most of the outside projects are put on hold, once the weather turns. Which means that all of the inside projects get their due attention. By December, the only ‘farm chores’ left are making sure the animals have food and water. The chickens are snug with the heat lamp in their coops, and the cows carry on as usual. With a higher body temperature than humans, and fluffy coats of thick fur, they stand out in the snow like it’s no big deal. I envy that. I get cold way too easily.

Anyhoo, inside projects include all the things we didn’t have much time for in the summer. I try to focus on getting more writing done on my novels and short stories, plus trying new recipes. The farmer’s wife (aka Mom, aka Kelly) has undertaken a series of projects this time around: herbs and herbal remedies, essential oils, and bread using freshly ground flour. She’s been studying up and getting her hands dirty (and the counter, and the dishes!), all in the interest of digging deeper into homesteading and whole, natural living away from chemicals and over-processed foods. Isn’t she the best? Some people might think it’s all hooey, but they haven’t eaten her bread yet, made from homemade sourdough and freshly ground whole, whole wheat flour (I say that because the whole wheat flour in the store isn’t actually the whole wheat. It’d go rancid too fast). This stuff is AMAZINGLY DELICIOUS, and slapping butter and, dare I say, jam on top just takes it over the top. This whole wheat bread and the stuff you get in the store aren’t even the same animal.

Learning how to use this fresh flour is a bigger curve than one would think, too. It’s just so different from the store bought stuff. It doesn’t work or act quite the same. I haven’t worked with it too much yet, personally, but I am itching to try my hand at a loaf of bread. Any maybe some rye sourdough English muffins (crumpets, as it happens. Did you know that? I thought it was a nifty little tidbit). Having a mill at home – two, actually, an electric and a hand grinder – opens up so many doors. We can make flour out of any grain we want (made some yummy buckwheat pancakes a couple weeks ago), not to mention nut butters.

The farmer has recently gotten into winemaking as well. He’s cooking up some elderberry wine, and trying out mead for the first time. I am pretty excited about that one, not gonna lie.

What else do we do in winter? Why, plan for the year ahead! And I say ‘plan’ lightly. Lists are made up of projects than need/we want to get done; Maisey just calved, so we have to get back into the milk swing again (yum!); seeds are organized and bought, etc. We’re really going to try making better use of the gigantic grocery bag of a greenhouse in the backyard this time around. I, for one, cannot wait to try my heirloom tomatoes and tigger melons.

And for honesty’s sake, we also read a lot of books and stream shows and movies. Tea and blankets nearly every night.

So, even though winter provides some much-needed down time from the growing season, we have plenty to keep us occupied! And in a few more weeks, things will start back up again when the sap starts running for the first harvest of the year: maple syrup. Exciting as that is, particularly since we ran out a while ago, I don’t think any of us are in too much of a hurry for the ball to start rolling quite yet!

What have you been up to this winter? What are you looking forward to come Spring?