The Day Draws Nigh

Hello, dear readers, and happy 3rd day of summer! Wow, I can’t believe it’s summer already – only 15 days left until my brother’s wedding! Only 14 days left until An Odyssey’s End is published! So excited!

Anywho, in preparation/anticipation of that, I’m going to play a little game here. I have with me the proof copy of AOE, and I will flip to seven random spots (not necessarily in order) and write down an excerpt from the page I come to, crafting a kind of flash teaser trailer type of thing. You ready? Lets go.

“Why?” Fwip asked. “We going somewhere?”

“If at all possible we should see if we can’t find some form of shelter,” the man answered. “The quicker we move the less likely are to get eaten.”

Her answer, and what she could possibly mean by ‘worse’, silenced them, and no one spoke again until she finished. By then there wasn’t a single mark left on the man’s torso, leaving no evidence of the mincemeat it had resembled just over an hour ago. Iris released her Spells and stepped back, taking a deep breath and fighting off a wave of fatigue.

The woman physician approached the once-injured man and passed a hand across his abdomen, the look of absolute amazement upon her features easy to read. “Truly a miracle! How did you come into such incredible power?”

“It was given to me by a pair of friends,” Iris replied, glancing at her hand a curling it into a fist . . .

“That would be an aluminum can.”

“Food. The label should say exactly what.”

“My Helosite’s a little rusty,” the man retorted blandly. “How are you supposed to open it?”

“The newer design is supposed to have a tab you can pull, but for these you’ll need a can opener.”

“And what in the name of briny hopswitch is a ‘can opener’?”

“I thought he’d be here sooner than this,” Thock said.

“Then he’s probably snooping around instead of asking for directions,” Thock replied.

Out of an adjoining room came Quincy himself, and in his arms he carried little Tao, asleep. “I was wondering when you’d come to see her,” he said in a rumbling whisper.

Teryn stopped short when he appeared. “Aye, well, I didn’t have any time before now,” she retorted. “And I still don’t have a lot of time.”

“Why is that?” he asked. “Are you needed back for the war council?”

“No, it’s because I’m needed back in Sekon’dome.”

Jonquil and Sergil ran to meet it, clashing in a duo, rapid fire attack that left no seam between their strikes. Sergil hefted his sword with a stony resolve, blocking and hacking with the gleaming edge, his body falling in time with the motions of a dual handed blade like an old dance he’d never truly forgotten. Jonquil wove in and out of their parries and attacks to deliver his own blows with a pinpoint precision that would have been fatal had their opponent been just about anything but what it was.

This was Sanctus, the purifying Spell.

Fires ignited all over his body, creeping across his shoulders and torso, piercing the murky depth of his tenuous form, blotting out the cast of his shadowed existence. Within moments Akairo became completely engulfed by the furnace, his triumphal laughter turning into howls of rage and agony as his darkness, his dross, was consumed.

“Curse you!” he screamed, high pitched and wild. “Curse you all to the depths of oblivion! Die! Wither! Fall to the worst and more painful deaths! I despise you pathetic, insolent worms! I hate you!”

Fine. Keep your miserable and rotten children — they aren’t worth raising up.

But that would not stop him from razing them down.

Well? How was that? I have to say, it was harder than you’d think, because there were so many parts that I thought ‘Oh! That would be cool!’ ‘Oh! I could do that!’ But alas, if I did that, then I’d have spoiled all the fun and written here the whole volume, and that would just not do.

I hope you enjoyed this, and don’t forget to mark your calendars! July 7th is the Promised Day, when dreams come true, bated breaths are released, and new adventures begin.

Don’t miss it! The Goodreads Giveaway for The Clandestine Crusade ends the 27th of this month — 4 days — so enter for a chance to win a free copy + bookmark! 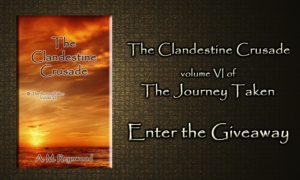 Also, starting today and ending Tuesday, the ebook version of The Clandestine Crusade will be available for FREE on Amazon, so grab a copy for yourself, grab one for a friend, grab one for the neighbor and his friend! The possibilities are virtually endless, and no halfway decent person is less than thrilled at the magnanimous gift of a story.