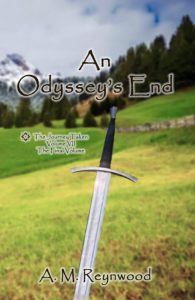 Akairo, deprived of his mortal host at the hands of the company, now haunts once more as a baneful spirit. Even so he will not be denied his quest to desolate Jasinda. From the ashes of his retribution he will raise a new world of his own creation and rule it as their Almighty.

However, he will not ascend unopposed, and his adversaries, though beaten down, are not defeated. The company continues to dog his path, pursuing him even across the Monster infested seas to the distant shores of the Forsaken Land. There they’ll rediscover the old world and its hidden treasures, coming face to face with the last surviving Faenari. The ancients equip the Chosen Ones with a weapon to aid them in their struggle against the world’s foe, but the company is cautioned in its use ─ for a power mighty enough to destroy the enemy is also perilous enough to destroy them. However, Sergil and the others deem the stakes are worth the risk. If they don’t try, they will certainly fail, and everything they know and love will be razed to the ground.

But when the time comes and grave sacrifices need to be made, who will pay the price for victory?