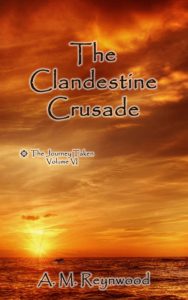 Discovering that their original plan against Akairo has been thwarted, Thock, Fwip, and Sergil soon realized that Iris had disappeared. Hot on the trail of her kidnappers, Fwip revisits his past as he ventures into the city’s underground in order to rescue her. What he learns there pushes the company northwest, to the port town of Bileravend, in hopes of gaining a second chance at the king.

But what they find is a settlement overrun with foreigners. Unwilling to pass through, they instead take the long way around, and in so doing come across someone they did not expect to meet in such an obscure place: the ninth chosen member of their company. What’s more, he’s an Helosite, one of the most despised races in all of Jasinda.

Continuing their quest to stop Akairo before he devastates their world, the company takes a detour through the Marshes before coming to the conclusion that, if they want to catch Akairo, they’re going to have to go to the homeland of the Helosites ─ a place where no free Sekon’domite has ever trod. The perils they face culminate into a confrontation with their sworn enemy, and it is there that the chosen must challenge the ruthless ambition of their foe and the depth of their own weaknesses if they want to succeed . . . or they’ll die trying.