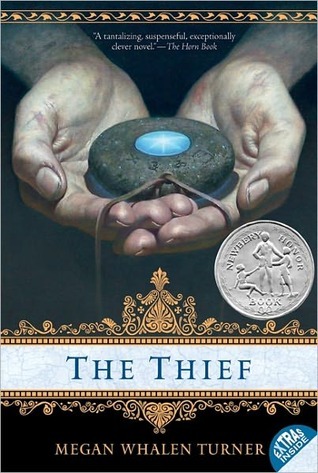 “I can steal anything.”

After Gen’s bragging lands him in the king’s prison, the chances of escape look slim. The king’s scholar, the magus, needs the thief’s skill for a seemingly impossible task ─ to steal a hidden treasure from another land.

To the magus, Gen is just a tool. But Gen is a trickster and a survivor with a plan of his own.

I picked this jewel up at a library book sale one day, thinking it might be interesting. Little did I know what I was getting into! Every time I read this (and it’s been several, by now) I can’t help but admire how Turner tells the story with such an ease that takes you along page by page. It’s one of those, “Oh, just one more chapter” kinds of stories, and ten chapters later you realize it’s one in the morning. I couldn’t bring myself to put it down (yet again). A good story is a good story no matter how many times you read it.

The narrative itself is written in first person (which, I unreservedly admit, isn’t my personal favorite POV) but even so I enjoyed it. We read from Gen’s point of view, and even though we’re privy to his thoughts, we still don’t get the full scope of what’s going on until the end. We’re still able to learn about Gen bit by bit throughout as the event progress, and I liked that.

The story flows smoothly from one part to the next in a style I can appreciate as both a reader and a writer, and you just can’t help falling in love with the characters. Ambiades is a total snot, Sophos is adorable, Pol’s steadfast devotion is admirable; I found the magus to be a little layered, not especially endearing at first, but once you get to know him he’s actually a pretty nice guy. Gen . . .  Gen is a piece of work. He admitted himself that his own tongue has gotten him into most of the fixes he’d suffered, and his wit certainly is sharp. He’s got a strong will, but not always as selfish as he’d like us all to believe.

With such a great cast of characters on a quest that turns into a bit more than any of them bargained for, The Thief is a tale well worth the read time and time again.

Learn more about Megan Whalen Turner on her website or Goodreads page, and don’t forget to grab a copy of The Thief to read for yourself!