Good day to you, readers, from the far hidden corners of the realm! Has the undulating weather of this March made you mad, yet? Bonkers? It certainly feels indecisive, doesn’t it? Warm and even balmy to overcast and blustery in a matter of hours, and then back again ─ if spring came as abrupt and resolutely as winter does, how different might things be? Ah, but there’s no sense in complaining, as it doesn’t serve to change a single thing.  All we can do is take it as it comes and trust in the Lord to carry us through!

Anywho, today we’re continuing on the theme of characters. The question I have here is:

Of all the characters you have created, which is your favorite and why?

Well I (personally) resent that question ─ we don’t play favorites in this house! So I’m going to ignore that one and move on to the next:

If you could spend time with a character from your book, whom would it be? And what would you do during that day?

Tough. Question. To narrow down the vast spectrum of characters I have thus far, I’ve decided to limit this inquiry to within the context of the Journey Taken. Although, having made a list (roughly 200+) that doesn’t make it a whole lot easier. That said, I thought about ignoring this one, too, or putting it on the back burner for later, because I couldn’t possibly choose. That’s like picking a favorite, right? And I’ve already said we don’t play favorites in this house. Nevertheless, I couldn’t help but think it an interesting question, so I gave it some consideration ─ just whom would I like to spend a day with? And it happened that, as I was thinking, my thoughts kind of muddled from ‘who I would rather spend a day with?’ or ‘what I would do with this person if I had a day to spend with just them?’ into ‘what would they do, if they had a day to just chill, do whatever they want?’

Well, I think Iris might like to go out to the town and spend the day looking at all the wares, maybe do some shopping. She probably wouldn’t mind having Jonquil along, too. Jonquil, on the other hand, if he had a choice, would most likely want to get away from town, probably go on a meandering hike type thing alone in the woods by himself with no one around to disturb his exploration, hunting, and nap in a spot of sunshine. Teryn would probably wander around town, too, until she found an alehouse and/or archery range. Maybe dominate the archery range and then hit the alehouse. Fwip would tag along, though for different reasons. His day of just doing whatever he wanted would leave him a wealthier man and lot of others less so. Keeping him otherwise occupied would protect the more honest side of the economy, I believe. We all know Thock would keep an eye on him, and outside of making sure his younger brother doesn’t get himself into horrible trouble, I don’t think he’s ever given much thought to what he would like to do given a day to do anything he wanted. He’s a very focused man. Sergil might just relax and knock a few back at the alehouse (and preferably not the one Teryn’s patroning), but he’d most like to spend his day with Lyla, whatever it is she might be doing. To not be rushed away and hounded by world-shattering responsibilities would be a dream come true, he might say. And Lollen? Pft. Well, Lollen would only be found at the library, tucked behind a mound of manuscripts. It’s how he grew up, after all, and old habits, old inclinations, die hard. As for Raleigh and Xanthus, Raleigh might not know what to do with himself for a while, actually. For so long his life has been directed by others that the freedom of choosing what to do with his time would baffle his brain. He’d then proceed to scramble for a way to spend his day (every idea likely involving work of some sort. Helosite leisure time, when it rarely shows its face, is usually spent doing something else productive). Although, deep down, buried under all that indoctrination and learned habits, some time with Robin, Ryner, and Xanthus, unbothered, would be his favorite. A day where he could be with them and forget what all he’d been through and bask in the company of his loved ones without the nagging possibility of being pulled away for some task elsewhere. Xanthus wouldn’t mind doing any of that, either. I don’t think he’d know what to do with himself, overwhelmed by the possibilities of what all he could do and all the things he didn’t think he could do. His first reaction would be to find a familiar face and stay with them. But if asked, and after some intense consideration, he’d spend his day with Raleigh, and probably wouldn’t mind having Robin and Ryner along, too. At least for now, until he learns more about himself as a person ─ and a free person at that.

So if you asked me who I would spend a day with (in the context of TJT), I still couldn’t tell you. So let me turn this question around and ask who would you like to spend some time with? And please, let me know in the comments!

Also, don’t miss out on the opportunity to enter for a chance to win a FREE copy of Adventures in Isle! The giveaway ends the 27th, so there’s only a few days left! Each copy comes autographed and with a series bookmark. 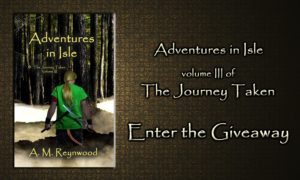 And now, starting today and running until the 27th as well, you have the opportunity to own free of charge an ebook copy of Adventures in Isle! Already have one? Why not tell a friend? Books are best shared, so spread the word!