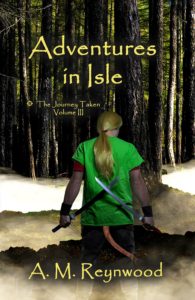 Isle, a mere afternoon’s sail northeast of Sekon’dome, is a land unseen by human eyes in almost twenty years. Needless to say, the natives are quite surprised to have a company of them upon their shores. By a stroke of providence the companions find themselves among the remnant of Leoni, whom they sought in their quest for answers concerning the war on Felinis. However, they discover first something else entirely: Sergil was keeping secrets. Big ones.

While most of the Leoni receive Jonquil, one of their own, with unfathomed enthusiasm, some are not so pleased ─ and the lions aren’t the only ones. Deep within the forest of Isle thrives a massive population of tigers, who are on less than the best of terms with their neighbors. When captured under the pretense of trespassing, the company is escorted through the treetops to suffer judgment by the clan head, the fearsome Tigress, who is legendary for her lack of mercy.

The misfortunates aren’t completely without allies, though, and these will prove indispensable in the struggles ahead. The shadows of the trees aren’t the only places where lurk their enemies, for as their endurance is strained, hearts, too will become vulnerable to the wiles of darkness.